Blog
We are supported by our users and we earn advertising fee from our advertisers.
Advertiser discloser
We are able to maintain access to our site being free of charge for our users by charging advertising fees to some partners. This does not affect our product reviews which are based on research and testing. The advertising fee combined with the conversion rate of the brand and product popularity may impact the location, prominence and order in which these products or services appear on our charts. We make effort to present up-to-date information; however, we do not compare or include all products or service providers in the market.

Our reviews are the opinion of our editorial team and are not impacted by the advertising fees that our advertisers may pay us.
Visit Site

This VPN doesn’t require registration and can be easily downloaded to any device. Once connected, the VPN protects users from online snoops, providing military-grade encryption to secure their online data.

Betternet allows users to avoid ISP speed throttling and enjoy a super-fast network connection. At the same time, it protects users from malware or phishing tactics that hackers may use to steal their data and gain access to sensitive personal details.

A simple, straightforward, and highly effective service, Betternet improves users’ internet experience by taking the stress out of scrolling. Users can freely access all their favorite websites and enjoy the benefits of a premium VPN service without any worry about informational leaks.

Additionally, the easy-to-use, user-friendly interface is ideal for those who may not be very tech-savvy, making it a highly appealing VPN service.
With premium subscription plans starting at $5.99 a month, Betternet is the go-to choice for millions of people worldwide.

Despite being a free VPN service, Betternet’s speed is reasonably good. However, users may experience occasional throttling, lagging, and inconsistent download speeds.

Betternet doesn’t offer many locations in the free version, and many of the options tend to experience connection errors quite frequently. This is likely because certain servers may be congested due to an overload of users. If too many people use a particular free server, it is bound to slow down.
A 160 Mbps connection, when used for a Betternet server in the UK, had a Ping ms rate of 156, a download rate of 17.37 Mbps, and an upload rate of 1.28 Mbps.

The same connection for a US server performed relatively better, with a Ping ms rate of 180, a download rate of 18.64 Mbps, and an upload rate of 2.23 Mbps. If your require top VPN speeds we highly recommend Hotspot Shield VPN – it’s the fastest VPN we’ve tested.

Betternet enables users to enjoy anonymous browsing and a secure Wifi network by encrypting their online traffic. It offers the following features:

Betternet masks your IP address, thus allowing you to browse anonymously and with no risk of any of your information leaking to your Internet Service Provider (ISP).

In the event of an IP leak, rerouting and connecting to other servers is redundant, and your original IP remains safeguarded as long as you use the VPN.

This feature helps users automatically connect to the VPN when encountering unsafe or public networks, protecting malicious third parties. Public networks lack proper security, and devices that connect to them are prone to hacking. Connecting to a high-quality VPN helps prevent that.

With Auto-connect, users can connect to public networks such as wifi connections in cafes, hotels, and airports without the risk of vulnerability to hackers and malicious third parties. Betternet will be activated by default in such instances, providing users with much-needed security to browse.

Split tunneling, or domain exclusion, is helpful for those who wish to remain anonymous online while simultaneously streaming a game or show without hassle or interruption.

This feature enables users to exclude selected domains from VPN traffic, allowing these domains to circumvent the VPN route and work on your regular internet speed. This feature is handy as VPNs can sometimes be slower than your usual network due to high traffic volumes.

While VPNs are useful to everyone, they may seem unnecessarily complicated, and Betternet helps simplify things for beginners. It is highly user-friendly and designed for lay people who may not be familiar with navigating high-tech applications and complex interfaces. 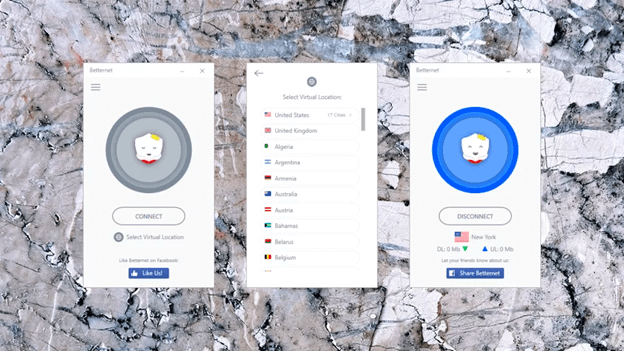 Figuring out how Betternet works doesn’t require much of a learning curve, and it is quite easy to navigate the service despite the number of features it provides.

The user interface is highly streamlined and runs smoothly without unnecessarily complicated menus and bugs.

Betternet can be easily used on almost every device without any hiccups. It is compatible with Windows, Mac, iOS, and Android.
From iPads and tablets to laptops and mobile phones, Betternet VPN provides ample flexibility and security to all kinds of devices.

Betternet uses Catapult Hydra protocol and AES-256bit encryption, which are more than sufficient for high-quality protection and provide top-tier encryption.

However, Betternet’s Logging feature does pose some concerns for the privacy of its users. Though Betternet has declared that they do not “record your VPN browsing activities in any way that can be associated back to you,” they do track other information such as users’ approximate geographic location and ISP details.

Betternet also maintains logs of the duration of sessions and the bandwidth consumed by users. Further, they keep track of the domains visited on an anonymous basis.

All of this is done for monitoring, support, marketing, and optimization purposes, but it can be considered a security or privacy threat. VPNs usually have a no-logs policy, and Betternet falls short in this aspect as this information could be compromised in the event of a security breach.

In an age where optimized customer support is a make-or-break metric for companies, this aspect of Betternet is quite disappointing.

Betternet has servers in 80 countries for premium users and 10+ for free users.

While the number of Premium servers is decent enough, free users are at a disadvantage as they have limited options available and cannot select which server they wish to connect to. This lack of choices for free users is a significant shortcoming of Betternet.

Free users face a lot of limitations as compared to premium subscribers. Aside from the lack of server options mentioned above, there are also other disadvantages.

Most notably, the 500 MB per day cap can be very limiting to those who browse a lot. Betternet also offers unlimited simultaneous connections, but this is underwhelming due to the 500MB cap.

The significant advantage of the free version is that users are not required to create an account. However, most VPN services offer this benefit.

Considering some of the shortcomings that users have to accept when using Betternet, it’s great that they offer a free trial before users can make a long-term commitment.

The basic service is entirely free, and it comes with a lot of limitations. To explore Betternet beyond these limitations, users can enjoy a week-long free trial of the premium benefits, after which they can decide if they want to pay a $12.99 subscription fee each month.

Given the overwhelming number of high-end VPN services on the market today, Betternet falls into a relatively expensive category. The free trial is thus helpful for new users to ascertain whether it is worth the money or not.

They also offer a refund policy with a 45-day window, which is outlined as follows:

“All Betternet subscribers can request a refund within 45 days from the purchase date by contacting our Help Center. (We apologize that iTunes and Microsoft Store Customers will need to contact the payment processor directly.)”

This is a fairly attractive policy as a week-long trial may not be enough for users to determine whether Betternet is the right fit for them. In such an instance, a refund policy is quite handy for users who have already paid the price for a subscription and are unhappy with their experience.

The VPN market is quite saturated, with many paid and free services offering high-end security features for the average online browser. Betternet has a fair amount of attractive features.

Betternet has some major plus points, such as ease of access and reasonably fast speeds. However, the usage limitations, and inconsistent connection speeds are definite drawbacks. On the plus side you can test it for free or use the premium version risk free for 45 days!

Our reviews are the opinion of our editorial team and are not impacted by the advertising fees that our advertisers may pay us.
Visit Site

Our reviews are the opinion of our editorial team and are not impacted by the advertising fees that our advertisers may pay us.
Visit Site
Was this helpful? Share it!